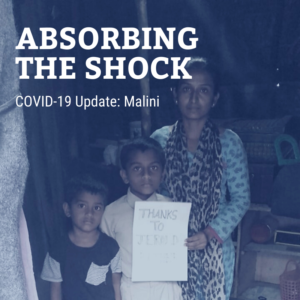 I came across the term, “inability to absorb shock” about ten years ago. People in poverty struggle to get by in life. If some crisis enters their life, it crushes them, and they are unable to “absorb the shock.” This buries them deeper into the clutches of poverty.

After lying dormant for a decade, that term came back to me last week as I went from store to store purchasing food, medicine, and staples to help my family weather the 21-day lockout. I have the ability to absorb shock. I have the capacity to cushion the blow so my family isn’t devastated. The overwhelming majority of the poor in India do not.

It is estimated that 80% of those that have a job in India work in the informal sector, jobs where you get paid for a product or service but do not receive any benefits (Source). These people live hand to mouth, earning daily wages that provide for just enough food for that day.

As the days have been passing in this lockdown, it has become more and more heartbreaking to hear of the devastating effect this is having on the poor. It must be such a crippling situation when someone would say that he and his family would rather die of the virus than of hunger (Source).

Malini is one of the millions of marginalized people who do not have the ability to absorb shock. In the great tragedies of life, her life has been a continuous build-up for this big blow.

Malini was married to an alcoholic who had no desire to change. He was abusive and didn’t contribute to the household at all. They had three children together.  She lives in constant physical pain, due to a heart condition. She cannot pay for the surgery she needs to live, much less to support her family.

As soon as her husband became aware of Malini’s illness and need for surgery, he took off and abandoned them. During this desperate time, she met Principal Gerard, of Bloom India Grade School. Principal Gerard helped Malini absorb the shock of being the sole provider and caregiver of three children.

Though already stretched, Principal Gerard made a way to bring Malini’s children to Bloom India Grade School. This allowed Malini to work as a housemaid while her children were safe at school. She earned $75 a month, and it was just enough to put food on the table.

But now, as the pandemic sweeps through India, she is no longer allowed in the homes where she works as a maid. She does not have enough money to buy food for herself or her three children. She is feeling desperate under the weight of this reality.

Principal Gerard and the entire Bloom India team is working to help Malini absorb yet another shock in her life.  She needs to know that she and her children are not alone in their sufferings.

You have Successfully Subscribed!

You have Successfully Subscribed!